Essential parts of a good turntable

The turntable is essentially a mechanical system that plays vinyl at a constant speed, picks up the tiny variations of the record grooves and then converts these small vibrations into an electrical signal. In a later stage this signal is passed through amplification and then converted into sound by a loudspeaker system.

The history of turntables dates back to 1877 when Thomas Edison invented the Phonograph, a device used to mechanically record and reproduce sound. In Edison's original design, sound was recorded onto a phonograph cylinder, a sheet of tin foil wrapped around a cardboard tube. Three years later, Alexander Graham Bell created the Graphophone, a device that used wax instead of tin foil as the recording medium. The first recording and playback device that used a flat recording surface instead of a cylinder was the Gramophone, introduced in 1887 by Emile Berliner. Gramophone records were first made from hard rubber, then shellac, and later from vinyl. For over a century record players were the only way of playing quality sound recordings and became one of the longest lasting audio technologies still in popular manufacture today.

Today's turntables underwent many improvements since the initial design, but still function on the same principle. While it may seem a simple device, those interested in buying a good turntable should begin by understanding its basic parts and features, and the importance of precision of each component. With no past experience and the multitude of products presented in a fashionable way, people tend to go down the cheap route and often regret their purchase. These low-grade turntables are mostly made of some kind of plastic with unbalanced tonearms and low quality, non-replaceable cartridges. They are highly sensitive to vibrations, produce a distorted sound and on the long run they can cause irreparable damage to your records.

Below we present the main types and key parts of a good turntable and how they operate. 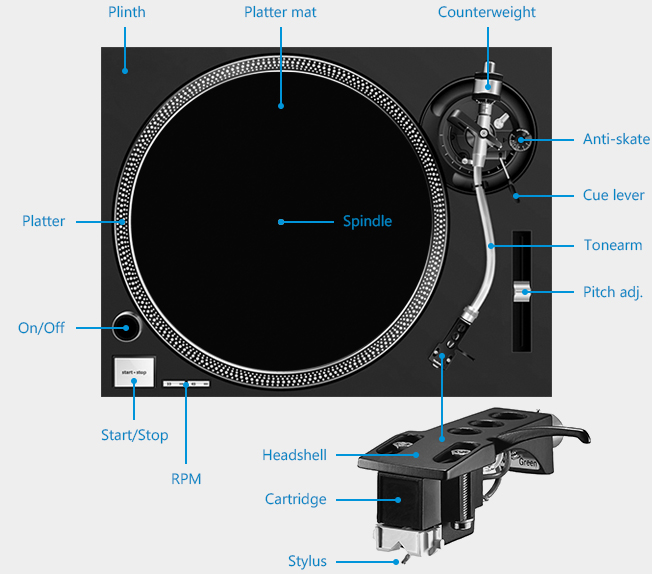 Plinth might seem a fancy word at first, but it's essentially the base of the turntable which supports and isolates the rest of the components from each other. The plinth should be heavy enough to provide good stability and not supposed to resonate or vibrate while it supports the motor, platter, and tonearm. They come in a variety of designs and finishes, ranging from exotic hardwoods to graphite, or from steel to medium-density fibreboard (MDF). High-end models also use combinations of different materials in a layered, sandwich construction to achieve higher mass and rigidity. Most turntables have pre-installed suspension feet under the plinth to isolate it from shelf and floor vibrations.

The platter is the part on which the record sits and spins when the turntable is in operation. Beside holding the record in place, the platter also serves as a flywheel to smooth out speed variations caused by the motor. Platters are usually made from MDF, cast aluminum, glass, acrylics or a combination of different materials, each having pros and cons and its own sound characteristics. However, the best turntables carry a very heavy platter or have weighted edges to supply the most flywheel effect. The use of a good platter mat can damp vibrations, protect the record's surface and provide a firm grip to both the platter and the record in order to avoid skipping. They are usually made from cork, rubber or felt. These are not to be confused with slipmats used with DJ turntables, where the opposite effect is needed for cueing up tracks. In addition, you can use a stabilizer weight/ring (or record clamp) for more stability and to eliminate slight warping in the records during playback.

The main purpose of the tonearm is to hold the cartridge and ensure that the stylus maintains a precise geometry in relation to the record grooves. The tonearm tube also houses the wires which carry the signal from the cartridge to the outputs of the turntable. In a good turntable the tonearm rests on a pivoting mechanism that allows it to move smoothly in any direction, both vertical and horizontal plane with very low friction. Tonearms demand a low mass, maximum rigidity and minimal resonance to dampen cartridge vibration. They vary in length, weight and shape, and usually are made from some kind of alloy, especially aluminum, but some manufacturers often use carbon fiber, graphite and even wood. Another, but not so common tonearm mechanism is the linear tracking design which carries the stylus in a straight radial line with no skating force, eliminating tracking errors. Their performance is considered to be superior to conventional tonearms, but they are much more complex, very expensive and difficult to set up.

The anti-skate adjustment dial, included in good tonearm systems, is a spring mechanism which allows you to set how much horizontal force is applied to the tonearm. Anti-skate is the force counteracting the centripetal force that draws the tonearm towards the center of the record as it spins, pushing the needle too hard against one wall of the groove. A vinyl has two tracks of audio recorded on it, one for the left and one for the right channel. These are the two walls of the groove (looking like a valley) and the stylus runs between them, picking up the stereo signal. Not having a proper anti-skate setting, the grooves can get worn out faster on one side, distorting the balance which results in a much lower sound on one speaker, but also cause excessive wear to the stylus and bend the cantilever. Usually the anti-skate setting should be the same as the tracking force on the stylus, but this does not always apply.

The headshell, probably the most touched part of your turntable, is a small piece attached to the end of the tonearm that the cartridge is mounted on. They fit all standard mount cartridges and typically contain either slots or fixed-position holes through which screws may be passed into the cartridge body. Slotted headshells allow adjustments to position the cartridge for a good stylus alignment. Headshells with fixed-holes are not suitable for all cartridges, however make setup of compatible cartridges relatively simple. Most headshells are made of aluminum, but can use special alloys to achieve minimal resonance.

The phono cartridge is a mechanical device which converts vibrations picked up by the stylus riding in a record groove into electrical signal. It has five key components: the stylus, cantilever, magnets, coils and the body that houses them. The majority of cartridges are based two main designs: moving magnet (MM) or moving coil (MC). In a moving magnet cartridge, the cantilever carries a tiny permanent magnet, which is moving between two sets of fixed coils that create the signal. In the moving coil design the magnet and coils are reversed, the coils are attached to the cantilever and move within the field of a permanent magnet. The cantilever, usually made of boron or aluminum, transmits the mechanical vibrations from the stylus to the coil/magnet assembly. The stylus, mounted on the end of the cantilever, is the part that is in contact with the record surface. It is typically made of a small polished diamond or other industrial gemstone. They are precisely ground and polished to fit the record grooves. The two most common stylus types, based on the shape of the diamond tip, are elliptical and spherical. Each contacts the groove differently, the elliptical needles allows for more groove contact, which increases provides better audio quality, while the spherical stylus sits higher in the groove making less contact and ensure less record wear. For the most part, cartridges themselves don't wear out, it's the cantilever and/or stylus that need to replacement from time to time. Some design don't allow stylus replacement so you'll need to change the whole cartridge.

Turntables are generally classified in three main types, based upon the method by which the motor spins the platter. Each drive system has pros and cons, and its own sound characteristics.

In a belt drive turntable, the platter is rotated using an elastic belt attached to a pulley on the motor. These are preferred by the audiophile community because they isolate motor vibrations more effectively. In some high-end turntables, the motor is entirely separated from the plinth to remove any rumble coming across.

In direct drive turntables the motor is located right under the center of the platter and is connected directly to it by the spindle. The main advantage of this design is that it provides constant and accurate speeds, with high torque. Usually this is an important feature in DJ turntables.

The third, less common option is the idler drive (rim drive), which uses a rubber wheel instead of a belt that connects to the platter.

Turns the power supply on or off.

Starts and stops the motor, along with the rotation of the platter.

Changes the speed of the platter's rotation between 33 RPM (rotations per minute), 45 RPM or 78 RPM (if available).

Allows you to fine-tune the speed of the platter's rotation within a given range (-/+). This is not crucial for casual listening, but it's an essential feature of DJ turntables.

Lets you raise or lower the tonearm and allows a gentle placement and removal of the stylus from the record.